Nicole Stacy, DVM, Dr.med.vet., Dipl. ACVP (Clinical Pathology) and Shane Boylan, DVM
NOTE: This summary is intended as a brief, basic orientation in sea turtle clinical pathology and is not complete. Please refer to references provided at the bottom of this page for further reading.
Many aspects of hematology and plasma biochemistry in marine turtles are vastly different from other reptile species and particularly mammals. Clinicopathologic analytes can vary with many extrinsic and intrinsic factors including sex, season, diet, and size/life stage.
Clot formation is unpredictable in reptiles, thus plasma is preferred over serum. The major advantage with plasma is that a small volume blood sample can be used for hematology and chemistry analysis. Soon after blood collection in heparin tubes, whole blood is used to fill capillary tubes for the evaluation of packed cell volume (PCV), total solids (TS), and plasma color.  An aliquot of whole blood should be saved for a white blood cell count, if performed (in-house or send-out). Blood smears should also be made soon after blood collection. The remaining blood should be centrifuged (with or without a clot separator) and the plasma harvested for processing. If not processed within 24 hours, plasma can be stored frozen at -20°C and run within 72 hours with negligible effects on most chemistry analytes. EDTA causes hemolysis in chelonians and should be avoided.

Some in-house testing can easily be performed on fresh blood samples. PCV, TS, and plasma color are very helpful to assess in-house since they provide rapid, valuable information to the veterinarian. Experienced personnel can review blood smears to get an immediate, subjective evaluation of blood cell concentrations and morphology. If samples are sent out to a diagnostic laboratory, it is recommended to use a lab that is experienced with reptiles and to use the same lab routinely (Wolf et al., 2008). It is also recommended to prepare and send at least 2 fresh blood smears upon submission of a blood sample for CBC. It can be helpful to save 2 blood smears on file, which can be stained with Diff-Quik™ or if no stain is available, fixed in 100% methanol for 5 minutes to be saved in slide boxes. A recommendation for blood smear preparation that causes the least traumatic damage to large reptilian blood cells can be found here (PDF) .

Handheld analyzers can be very useful for quick assessment of critical analytes (temperature-corrected blood gases), but it does not provide any reliable hematology results in reptiles (e.g., hematocrit, hemoglobin). If it is impossible to obtain the cloacal temperature of the patient, the ambient temperature can be used for temperature-correction. Most analyzers allow entering the temperature directly, but if necessary, the blood gas results need to be corrected using established formulas (Innis et al., 2007). Please note that the hematocrit and hemoglobin obtained by handheld analyzers are unreliable in reptiles, and only a spun PCV by centrifugation will provide an accurate measurement of the red blood cell mass.

Since circulating blood cells are all nucleated in reptiles, automated WBC (white blood cell) count methods are not available and manual WBC counts need to be performed (e.g., Natt-Herricks-TIC®, Phloxine B method). The main challenge in reptile hematology is the differentiation between lymphocytes and thrombocytes upon blood film evaluation (Fig. 4) and when performing WBC counts by hemocytometer. Please note: morphologic and quantitative evaluation needs to be performed in areas of even cell distribution on the blood film.

We refer to Stacy NI, 2011 as guideline for cell morphology and cell functions in reptiles in general, the images shown here demonstrate species-specific differences for sea turtles.
ERYTHROCYTES (red blood cells, RBC) in sea turtles can have prominent dark basophilic inclusions (Figs. 1a-d). These inclusions have been documented in other chelonian and reptile species and have been identified as degenerate organelles. Erythrocytes of healthy, non-anemic sea turtles can also have very mild basophilic stippling and/or polychromasia (Figs. 1a-b). In anemic sea turtles, it is very helpful to evaluate the blood film for evidence of erythroid regeneration (Figs. 2a-d). Morphologic features of RBC that indicate a response of hematopoietic tissues in an anemic sea turtle include one or more of the following: increased anisocytosis and polychromasia, basophilic stippling, mitotic figures in erythrocytes, and increased numbers of early stage RBC precursors. In early erythroid regeneration, only early stage precursors (e.g., rubriblasts, rubricytes) may be observed which should not be confused with lymphoblasts (Fig. 3).
Figures 1a, 1b. Caretta caretta with PCV 45%. RBC with distinct basophilic inclusions consistent with degenerate organelles and some with diffuse basophilic stippling. Wright-Giemsa stain. 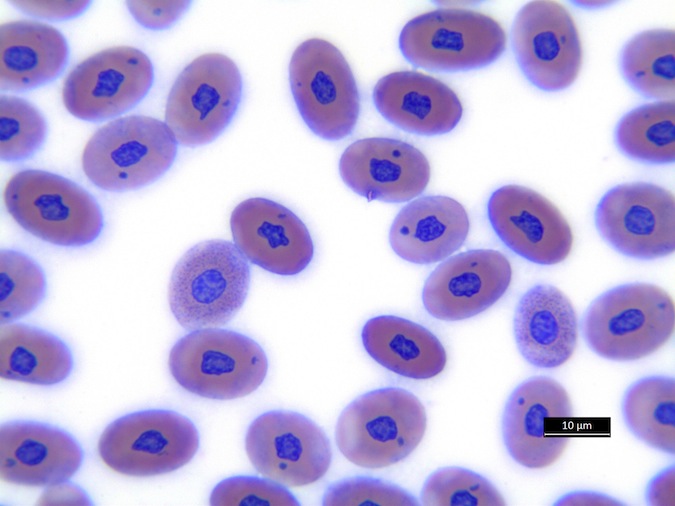 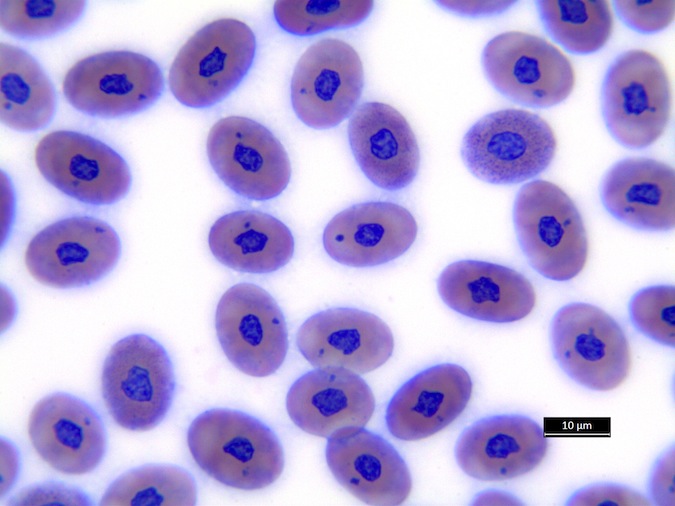 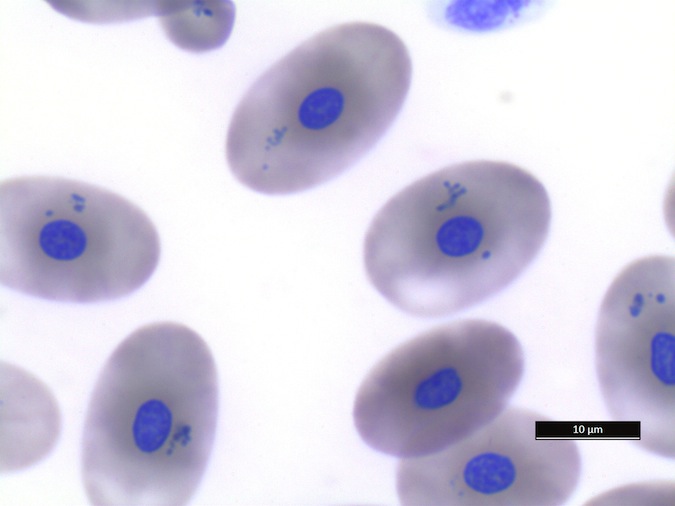 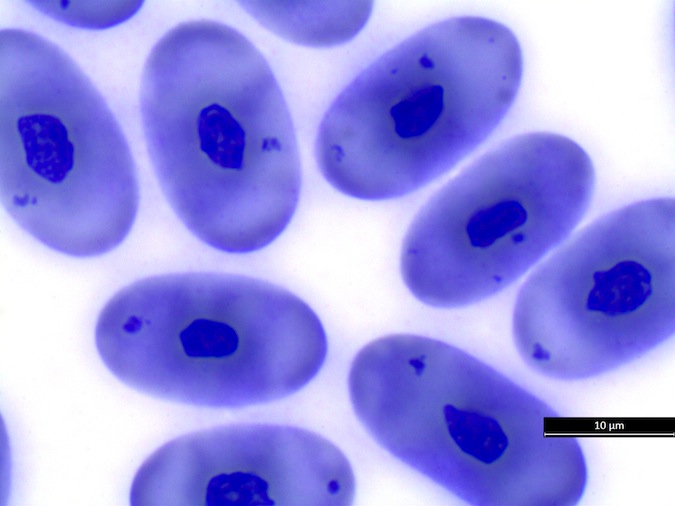 Figure 2a. Chelonia mydas with PCV 35% (PCV 2 weeks before was 18%). Marked anisocytosis and polychromasia, mitotic figure in position 4. Wright-Giemsa stain. 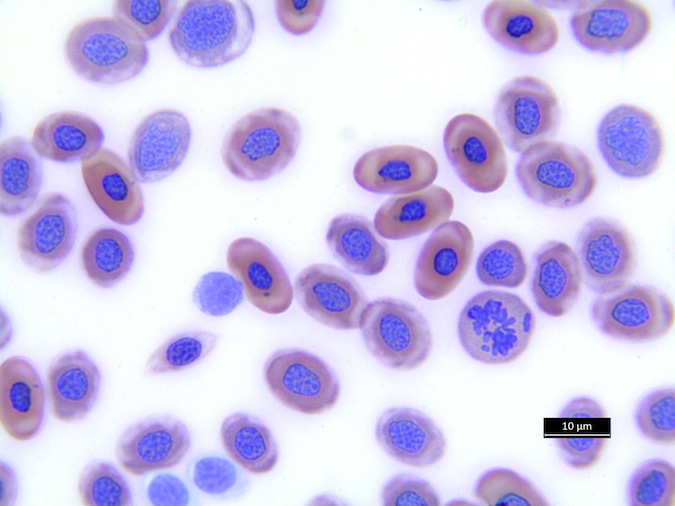 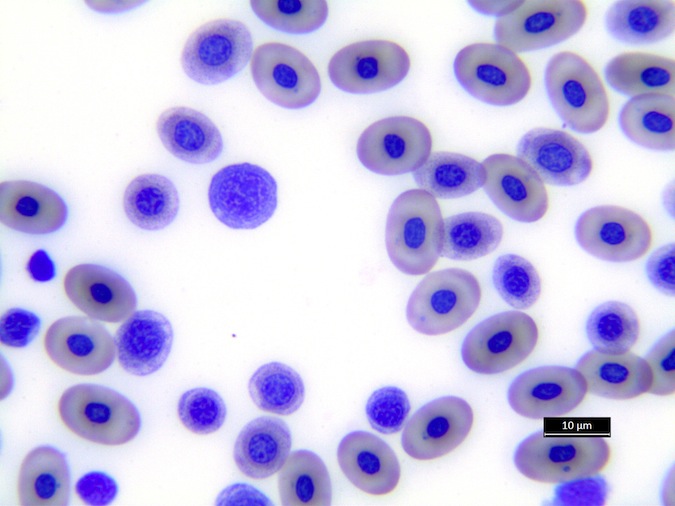 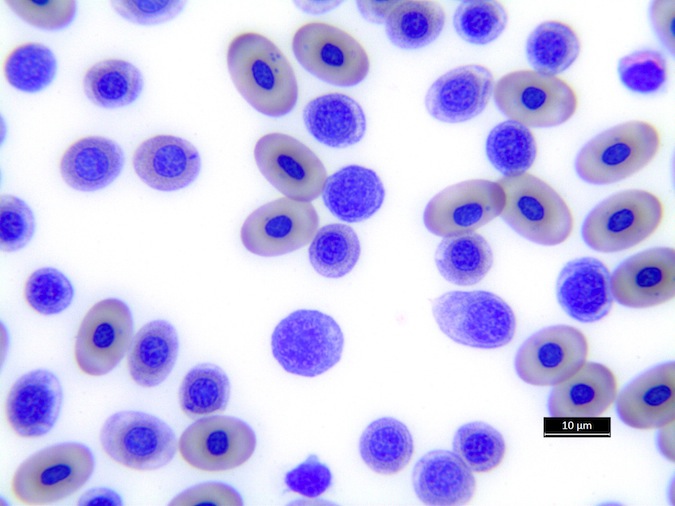 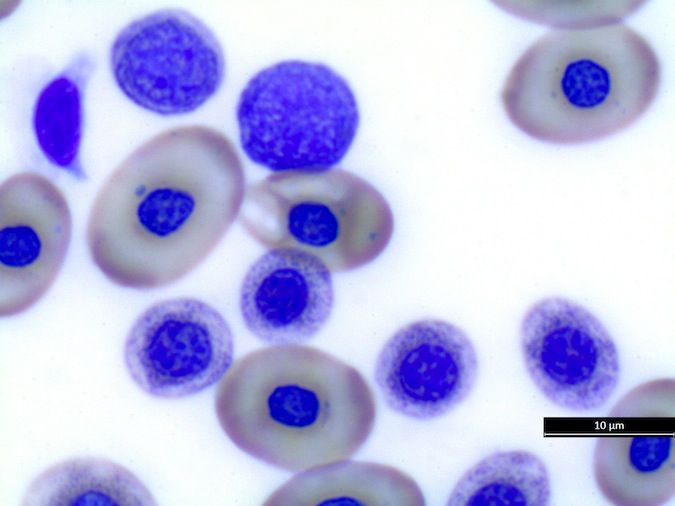 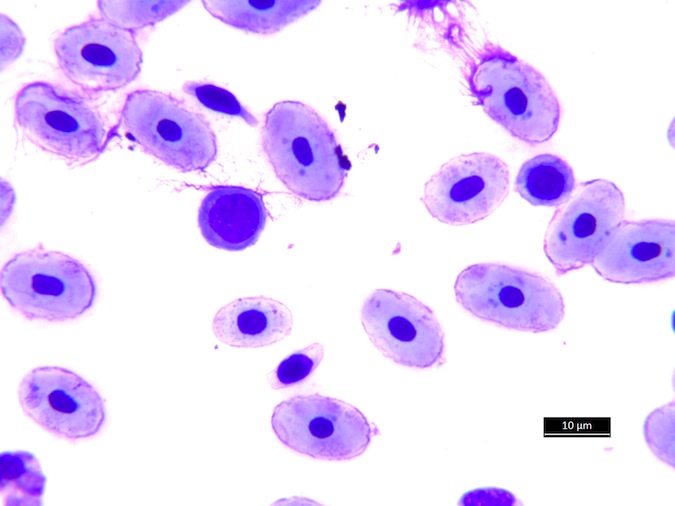 THROMBOCYTES: are frequently clumped in blood smears prepared from heparinized samples. Thrombocyte clumps can often be observed in the feathered edge of the blood film. Since a thrombocyte count by hemocytometer or a numerical thrombocyte estimate by blood film evaluation are inappropriate because of the presence of clumps, the thrombocyte concentration can be subjectively evaluated and reported as normal, increased or decreased (Figs. 4, 10).
Figure 4. Lepidochelys kempii. Two lymphocytes and a single thrombocyte in position 5. Wright-Giemsa stain. 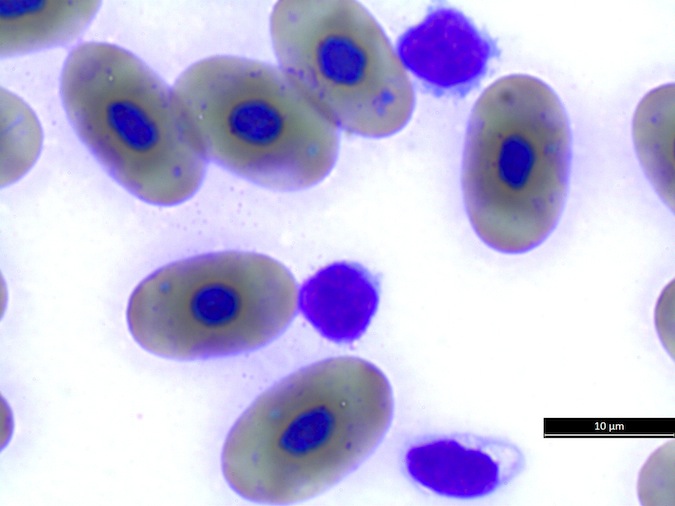 Heterophils are similar in morphology to other reptilian species (Fig. 5) and can also become toxic and/or left-shifted (Fig. 6). Heterophil toxicity is non-specific and can be seen with infections (esp. bacterial), tissue necrosis, metabolic derangements, or with administration of some drugs. In active inflammatory disease, immature (=left-shifted) heterophils can be seen in the peripheral circulation. Left-shifted heterophils can be identified by larger (and thus immature) nuclei that can be elongated or pleomorphic. In some patients, left-shifting and toxicity may be observed concurrently (Fig. 6). The disappearance of toxicity and/or left-shifting are considered good prognostic indicators. 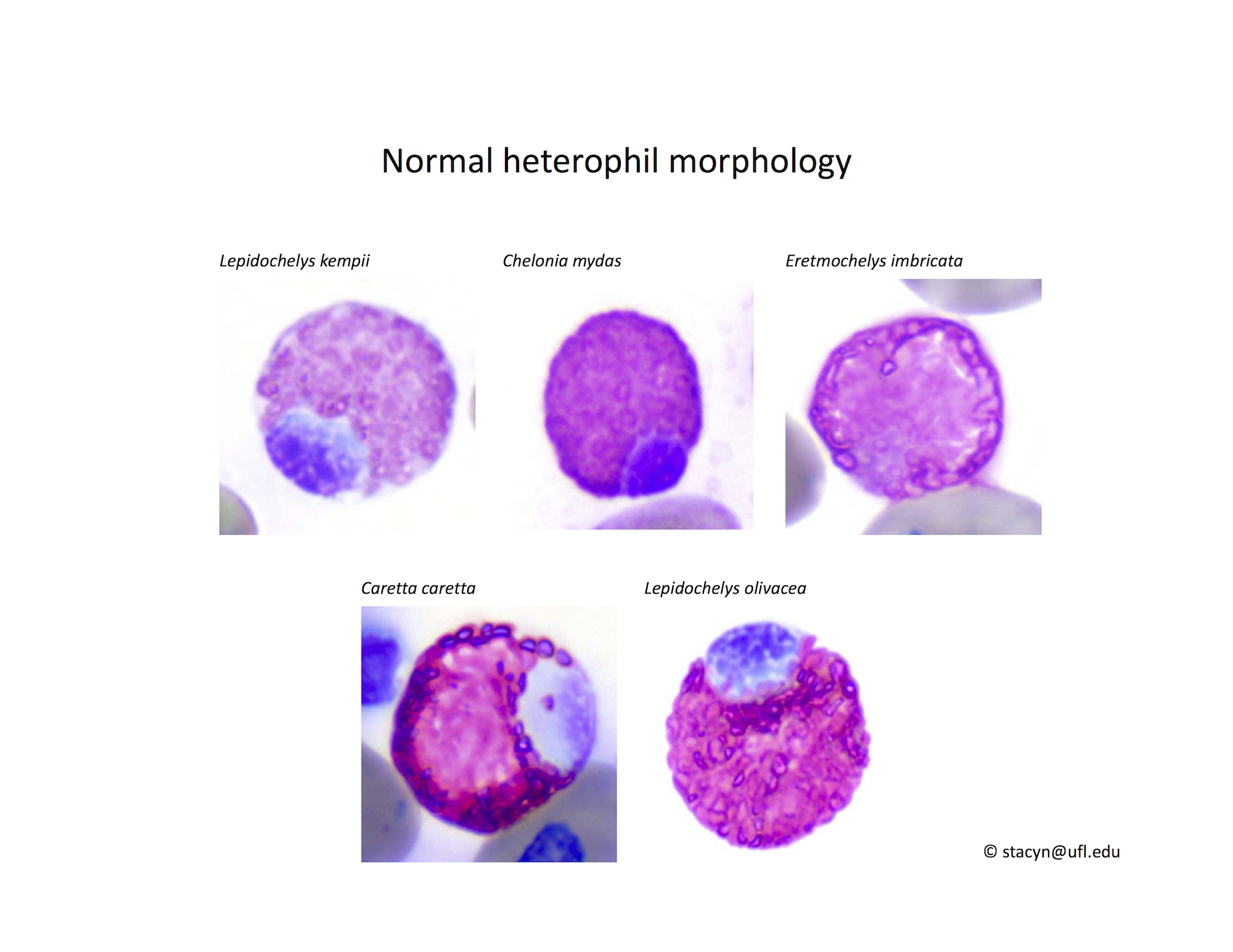 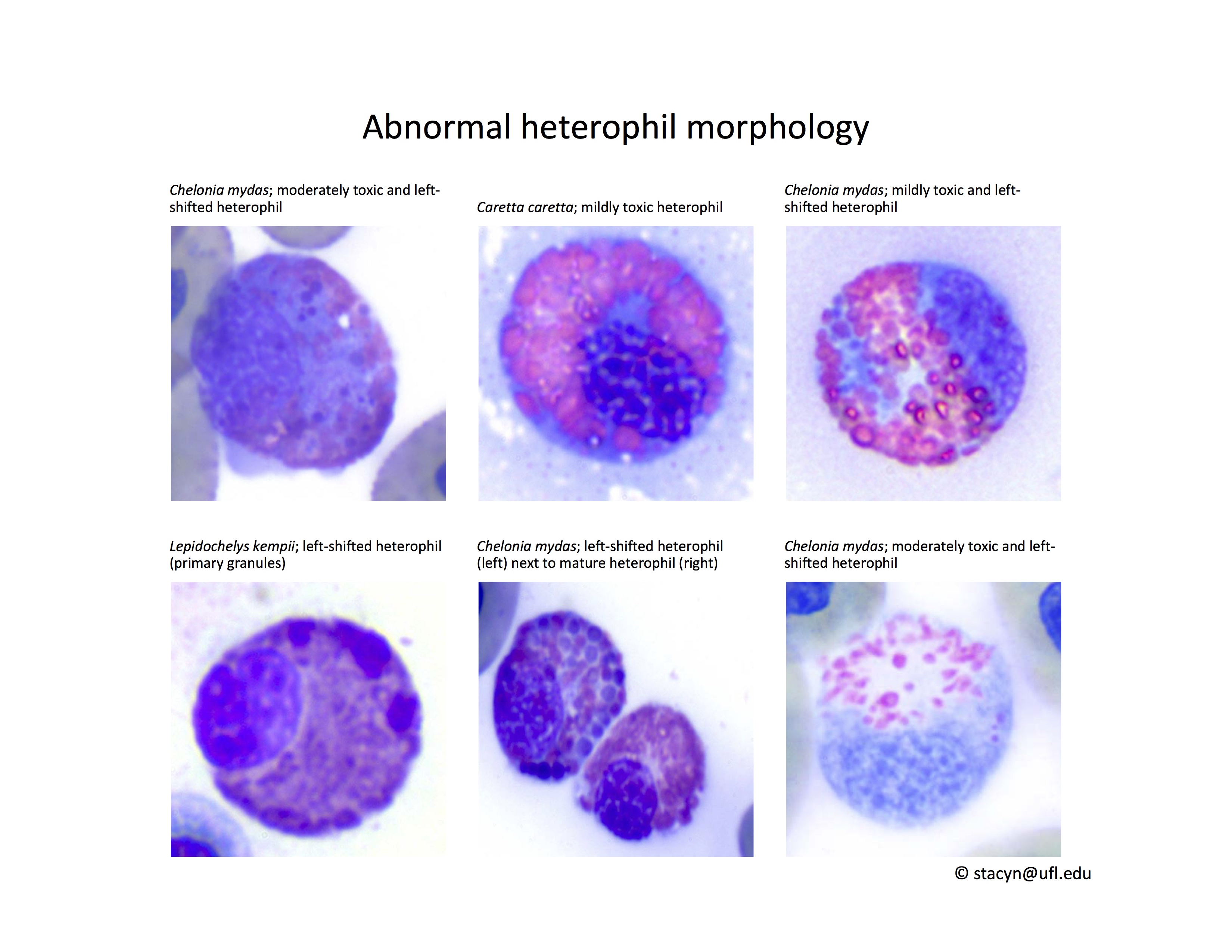 Eosinophils have a unique morphology in sea turtle species, with a variable number of spherical granules that can be focally aggregated within the cell (Fig. 7). 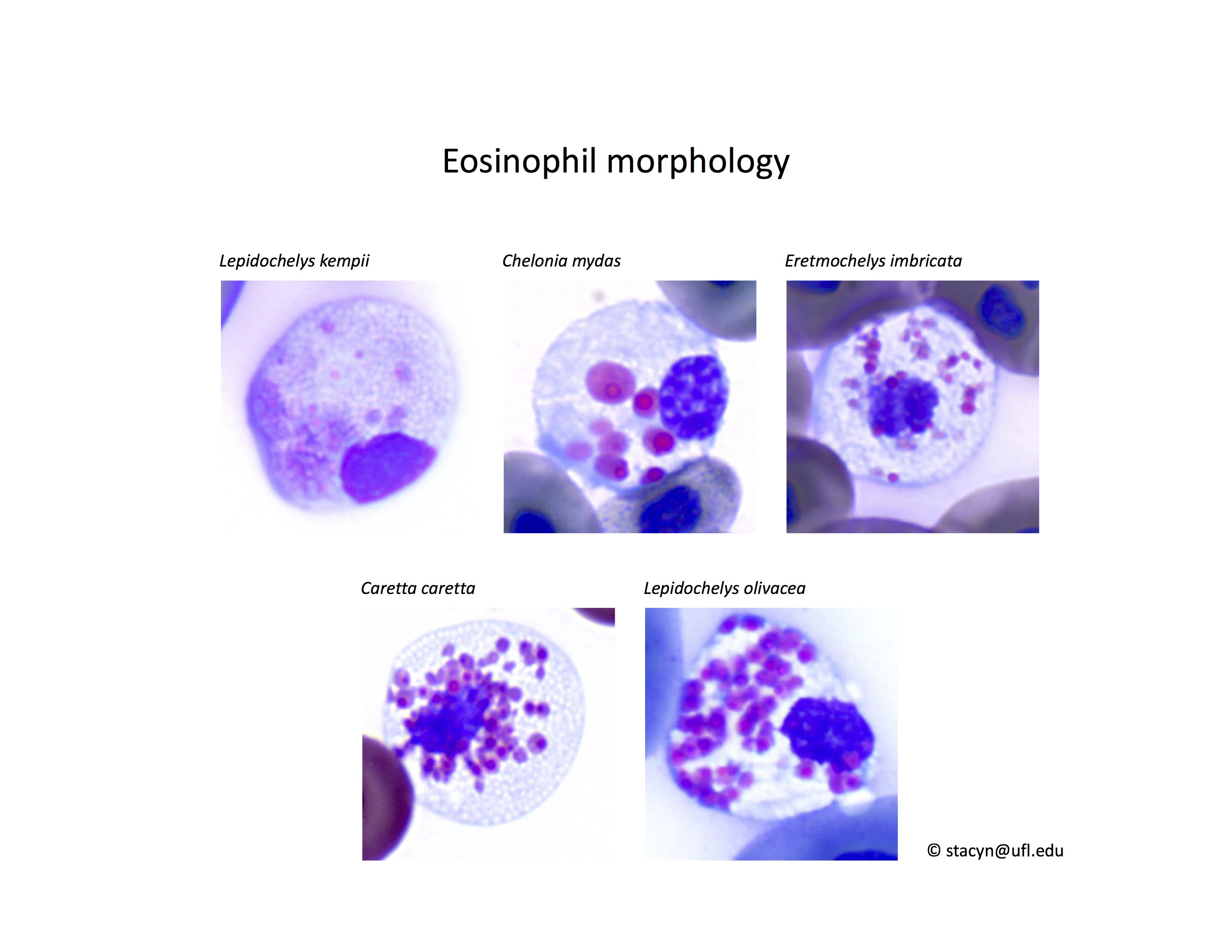 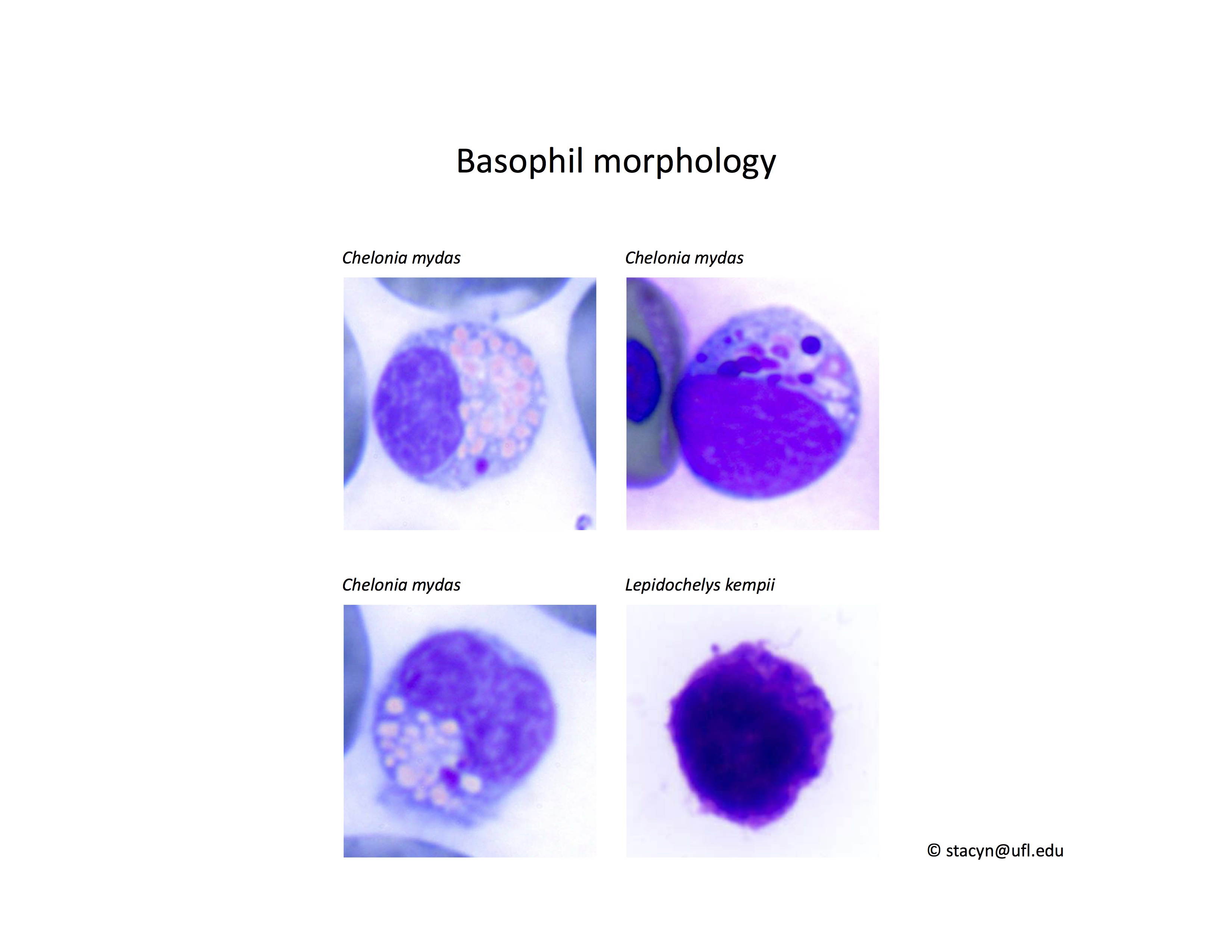 Monocytes (Fig. 9): Very low numbers of melanomacrophages or monocytes with proteinaceous debris are consistent with normal findings. However, monocytes with phagocytized erythrocytes and/or hemosiderin (greenish-basophilic, homogenous material) indicate red blood cell destruction. Phagocytosis of leukocytes by monocytes is also an abnormal, non-specific finding, which may indicate immune-mediated destruction of these cells in inflammatory disease. In cases of phagocytosis of cells in the peripheral blood, blood culture may be helpful to exclude septicemia. Please contact your microbiology laboratory to request incubation of reptile cultures at room temperature and for longer than for mammalian cultures. 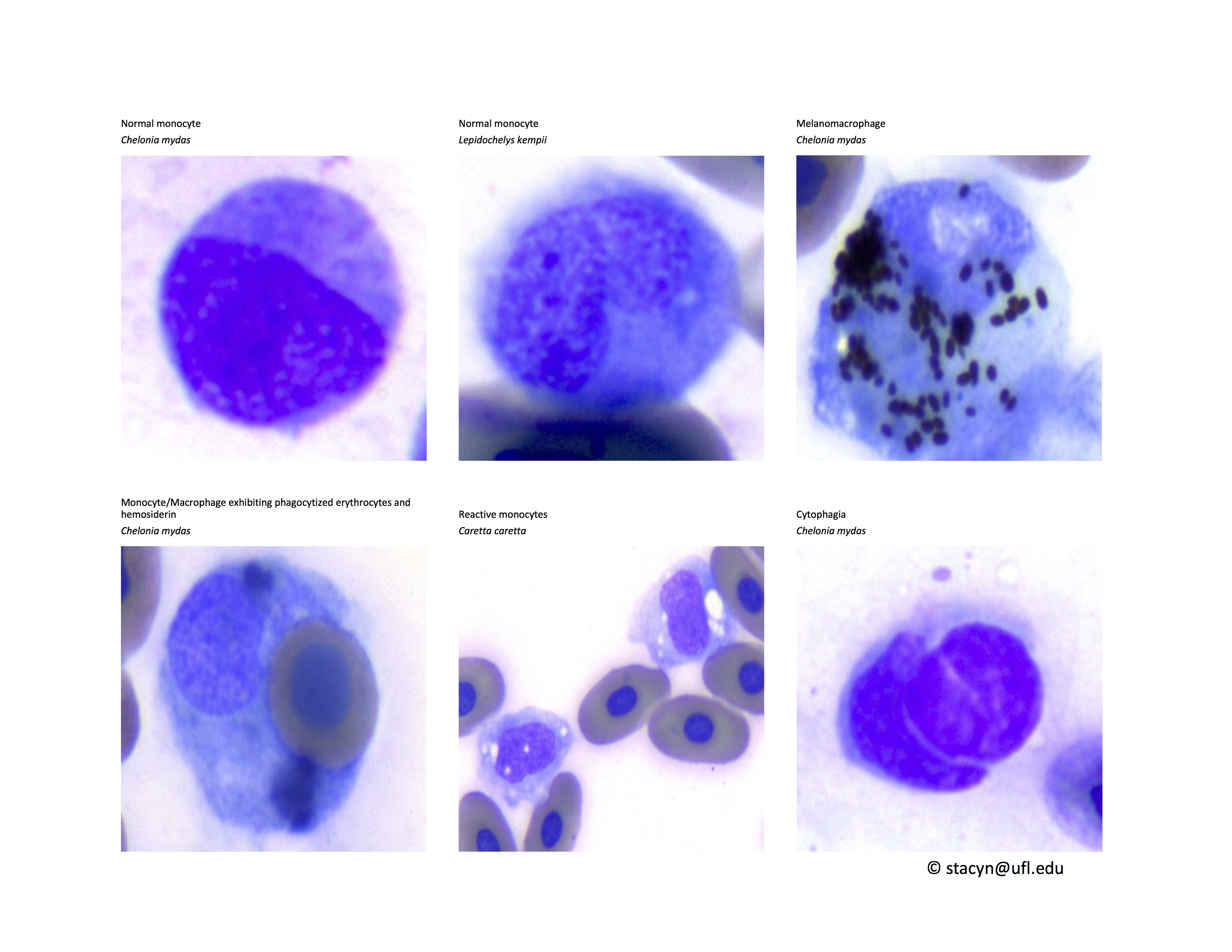 Lymphocytes (Fig. 10): As in other reptile species, lymphocytes need to be differentiated from thrombocytes. Lymphocytes can be reactive in response to antigenic stimulation. Reactive lymphocytes can have dark basophilic cytoplasm, and it can be difficult to differentiate them from early erythroid precursors. This differentiation is very important because the presence of a regenerative response in an anemic patient is a good prognostic indicator. 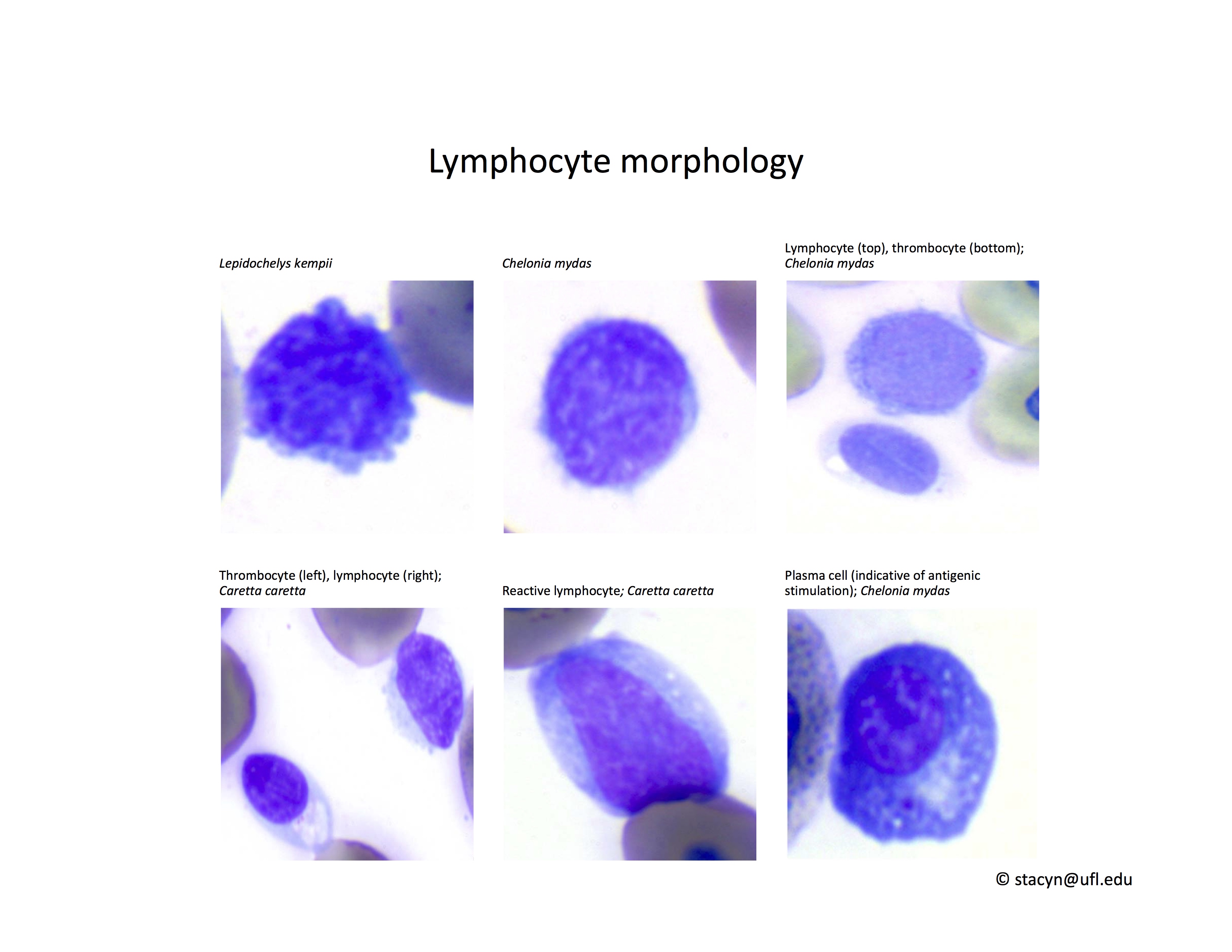 The plasma color in sea turtles is typically straw-colored in healthy animals. Abnormal colorations of plasma include hemolysis, lipemia, or biliverdinemia (dark green plasma). Hemolysis can occur during difficult blood sample collection or inappropriate storage of the blood tube (e.g., direct contact of blood tube with wet ice) and significantly interferes with a number of chemistry analytes that need to be considered when interpreting chemistry results (esp. K, P, CK). Lipemia can be seen post-prandially and can be avoided by collecting fasted samples (8-12 hours). Light green color in green sea turtles or yellow plasma color may originate from dietary chlorophyll or carotenoids, respectively. Biliverdinemia (dark green color) has been associated with starvation or liver disease in sea turtles.

Calcium (Ca) and Phosphorus (P): the concept of Ca:P ratio needs to be very carefully applied to sea turtles as it is heavily dependent on diet, season, and size of the turtle

Analytes with low to no diagnostic value:

Bile Acids have neither been established nor validated in sea turtles

URINALYSIS in sea turtles is of limited diagnostic value since sea turtles do not concentrate urine, and urine often gets contaminated with fecal material when passing through the cloaca. However, in due consideration of the aforementioned, cytologic evaluation of the urinary sediment or cloacal contents may provide diagnostically useful information. For example, urinary casts, protozoa, metazoan eggs, leukocytes, or erythrocytes found in urine/feces may provide useful clinical information when combined with other clinical findings.

Link to Dropbox folder with references included in this introduction HERE